Nissan, a quality Japanese motor company with great styling, well as far as the Skyline goes, The Skyline arguably the Japanese manufacturers best ever production road car. How ever it was not always this way read on...

The Nissan Skyline started out as a coupe concept the thinking of Prince Motors in Japan. The idea was to design a car with similar looks to its competition across the globe. The first incarnation was the Series 1 it had 60 bhp and a rather sporty shape for the time, the series 2 had 70 bhp.Not exactly the same power as today’s as a GTR. You could choose between two factory standard models - Convertible or a Coupe.

Soon after the E Series Skyline was released with a punchy 1.5 litre engine with 70 bhp it was racing. This commenced in 1964, many Japanese teams started to rank in local races. A little later the Nissan Skyline 2000 GT was introduced.The GT was designed to be in direct competition with Porsche, with its high compression pistons and close ratio 5 speed gear box and racing cams it was a serious contender on the circuit.

The car remained under Prince Motors development however was completely funded by Nissan who owned a large percentage of the company. The C10 was owned by Nissan. In 1968, Nissan bought out Prince Motors.  This was the time the 5 speed, 4 door model was released, in 1970 the 2 door was unleashed on the market, sporting a 108 bhp GT engine.

The C110 Skyline was a 1600 GT model running 110 bhp. The overall design C110 had very sleek lines and a much needed aggresive stance.

Initially the C110 was released sporting A GT-R badge, however this was removed due to its looks and lack of power. The C110 was fuel injected with a T -this denoted turbo. The oil crisis at the current time played a role in the lack of bhp in the Skyline range.

A re-branded Nissan Skyline was released the R3X known as the R30. It was typically a very boxy car much depicted from the 80’s when boxy was good. The model had a 1.6 litre fuel injected engine. Later R30 Skyline models had a greater engine running at 145 bhp, these cars then started to do very well on the track.

The next incarnation was the R31, sleeker lines and redesigned interior and a much sportier exterior. The RB engine was introduced from Skyline R31 onwards, with a straight 6 cylinder engine capable of creating 130 bhp / 160 bhp and even 180bhp the addition of a turbo and intercooler pushed the car to 190 bhp. The HICAS was formally introduced, HICAS basically gave the car 4 wheel assisted steering.

The Nissan Skyline R32 was the introduction of the Japanese Supercar, well known in today’s world. With an RB engine, HICAS system and aggressive looks, this car truly was a force to be reckoned with. The Nissan Skyline GT-S was released running a 150 bhp RB engine. The release of the RB26 dett twin turbo pushed the Nissan Skylines total up to a staggering 280 bhp. The auto dominated all the races it entered throughout the world. No one wanted to race against the Jap Supercar, therefore its own class was introduced. It was around this time the Japanese government started to regulate bhp.

Generation 11: 2007 -The Latest version of the Nissan supercar a totally redesigned model, a completely different look.

The Latest Skyline, or now as it's named The GTR 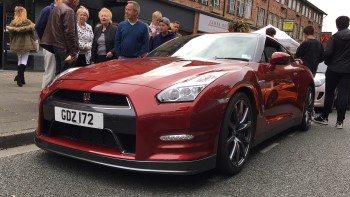