It's quite crazy to think, the Ford Capri has just turned 50 years old this year, now everyone has either owned one or experienced one.
There were 3 Mk's produced in total and one of the final models was the Capri Brooklands Edition a 2.8l that came in green and was a special edition Capri.
We interview the founder of Ford Capri club Mansfield, this club attracts members from all over the UK with a range of fabulous cars.
These cars include a Zakspeed tribute, Tickford and the exact Mk3 Capri that was used as a base for the yellow Corgi model car that was sold in many toy shops.
The Zakspeed is a rather special model, it's creator wanted the car to feature 3 points the racing car had, petrol filler on side rear window, a Turbo engine and a side exit exhaust, all these were achieved, both this and the RS were driven to the show in torrential weather, a rather brave feat.
Each car on display was pretty much spotless and each model was different and very cool in it's own unique way.
Tweet

Well we've just reviewed this rather well priced Crossover come city car from Ford. The model we had came with a 1.2 3 cylinder petrol engine with 85ps, you can also get another petrol model and 1 diesel too, they are all 5 speed manual.

Now how does the Active differ? Well you get 15" alloy wheels, AWD style cladding and rough road shocks.

Find out how it drives, if it's roomy and whether it's economical in the review. 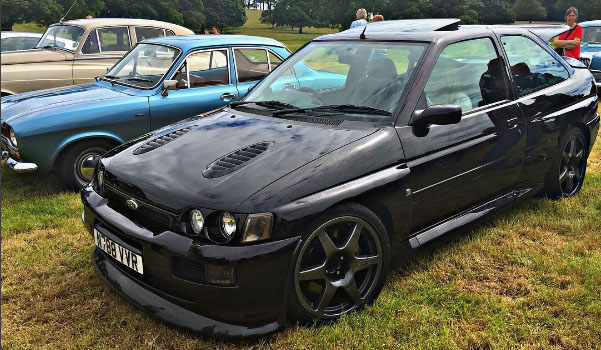 A rally car based on a humble hatch back, The Escort RS Cosworth and WRC first came about in the early 90's, after the the first Sierra Cosworth, the phenomenal car is basically an Escort hatchback floor pan, with stretched quarter panels, manufactured longer and with a few more additions. The engine is 2 litre twin cam turbo charged engine which runs unleaded fuel 97 ron (super unleaded) and even has a catalytic converter,

Fordlandia - The vision of Henry Ford

It seems only apt that we write about Fordlandia, the day after, what would have been Henry's 150th birthday, when you think of Ford you think of inspiration, the first auto production line and the Model T, the only car that you can have in any colour as long as its black.

The initial idea for the town was to provide the car manufacturer with rubber for car tyres, without relying on Malayan Rubber, better known as British rubber. The vision was to live and prosper in Fordlandia, through simple morals, and no alcohol. The project steamed ahead with homes being built relatively fast, next running water, electricity even swimming pools, Ford believed leisure was a major part of the economy.

It was an interesting idea, and may have worked if the production of rubber elsewhere hadn't taken off, it would have also been more successful if the people running the show knew about cultivating rubber plants, soil quality and how to fend off predators of the plant, even moving the town wasn't enough. The final blow was with the invention of synthetic rubber making the whole town, surplus to requirement, the land was sold back, Fordlandia just wasn't to be. Today the location is peppered with disused building, of what used to be, Fordlandia: Henry Ford's Forgotten Jungle City.

The timeline of the RS motorsport division of Ford, from the late 60's to late 2000.