The brand new Honda Jazz Crosstar has been alongtime coming courtesy of global events, but was it worth the wait?

This is not your stereotypical Jazz, and may well attract a younger audience with it's funky looks and impressive styling and of course the addition an offroad style bodykit.

It's a bit of a beast and looks quite a bit different to the standard Jazz.

It's powered by the same powertrain, yes like the Jazz there is one to choose from the e:HEV which comprises of a 1.5 iVTEC engine, 2 high energy electric motors -one to charge and one to propel and an eCVT.

It does have a range of additions for the extra price including water repellant funky interior, 30mm higher ride height allowing you to be alittle more adventurous on your extreme picniccing and of course uprated infotainment system.

Safety has also been notched up with the Honda sensing suite which includes adaptive cruise control, collision detection and hanow has 10 airbags.

The baby crossover come Citycar retails for just over £22,600.

Please enjoy and we've just had a Mitsubishi Eclipse Cross delivered, sadly one the last cars we'll ever get from the Colt Car Company due to Mitsubishi pulling out of Europe.

The Honda Jazz, a car that has been somewhat stereotyped for the last few years, has ths latest variant got what it takes to break this?

Well in a word, yes - let us explain

The new Hybrid Jazz has a 1.5 iVTEC DOHC engine, an electric motor and an eCVT, it'll pull 0-60 in around 9.5 seconds and offers around 65mpg.

It's not the fastest ca, yet it's engaging and fun on a backroad, and the hybrid system works very well, seamless transition betwen all 3 modes, we managed around 45mph on pure electric, and the B mode on the transmission really works with recharging quicker.

There are 3 trims to choose from and the Crosstar which will follow this.

Our model retails for around £22,000, we have the EX trim which builds on the SE and SR which include Active Cruise Control and Honda Sensing - the EX has additional Blind spot monitoring and Cross Traffic alert.

The ultimate sports car let down by a few points, the performance of the NSX Type-R nothing short of amazing. The car has been around for 16 years or so. It created such a buzz when it first stunned the world with its exotic Japanese styling, and its technological advances in being built in complete aluminium and of course sporting Honda's trademark, advanced high-revving engines, a V6 in this case with fibre reinforced metal plus VTEC variable valve timing. 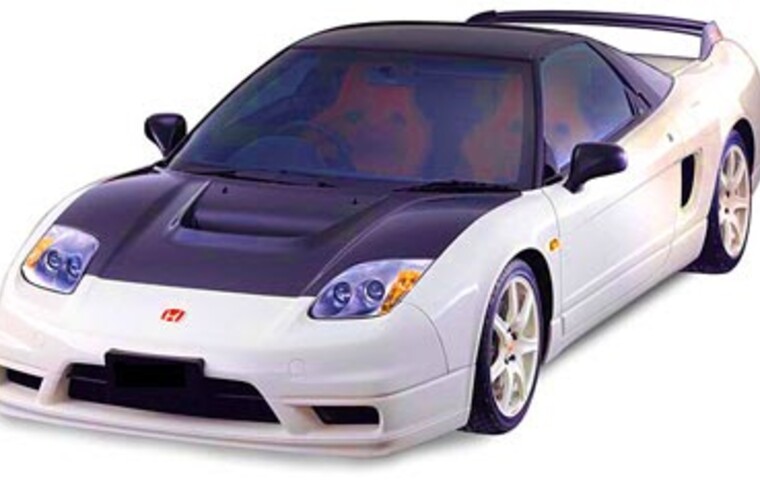 The fastest NSX the Type R faced the debate on whether it was worth introducing into the UK car market in 2002. However shortly after this Honda took the chance, and if they hadn't you could have had a the car imported. So all was not lost.
Has it really been 12 years!
Back in 92 the Supercar took the world by storm with it's ahead of the time Jap styling, the car has been subjected to slight changes over the years however in 2002 there was a switch from the pop-up headlamps to faired-in headlamps. The idea behind this is to reduce drag co-efficient drag from 0.32 to 0.30, as for looks, well you decide, it has been described as looking frog eyed.
Interior
For some reason Honda has never really prided its self with sleek & stylish interiors and the NSX is no exception even over the years of production there were very few interior changes. The best description agreed by many is 'Very Black' even the headliner - however these are minimal problems compared to cars real calling position, handling and overall driving. As you are seated you feel like you are in a very low feeling super car, the seats provide support at both hip and shoulder and laterally. The position for the pedals are directly ahead, and are complimented by a footrest, it has height and reach adjustable steering column, the low roof also has been catered for due to fore/aft seat adjustment, making it perfect for many people and above all very comfortable.
There is a lack of space in the NSX as you would expect from such a small sports car, the front of the car is fitted with a spacesaver therefore the little space there is already taken up, the rear however due to its length allows approx storage for a couples holiday cases. Usually with mid engined cars such as MR2's and the Countach , however the Honda NSX has high visibility ratings. When in the driving seat you can see both front wings from the driver's seat, the low level rear spoiler isn't a problem either, reversing is no problem with wraparound rear window.
Suspension, driving & performance
The Honda car is fitted with speed sensitive electric assistance steering but has a steering circle of 3.2 turns lock to lock. The six-speed close ratio gearbox is helped by a light clutch with slick precision shifts - the VTEC V6 is so torquey it can run at 20mph in top gear.
Like you would expect the car is equipped with racing car suspension, the revised 2002 model has front uprated springs uprated anti-roll 10mm increased track, the car comes with 17 inch rims and 215/40 and 255/40 low profiles front and rear. This gives the NSX a stiff ride, much like lowered and uprated suspension kits fitted to other cars such as the Golf GTI. There is ABS and traction control to help in bad conditions, air con, cruise control and other electrical gadgets. A real country roads car, it is truly built and setup superbly for rural roads with its wide stance and 3.2 litre V6 will, easily pulling from tickover, its capable of producing 276bhp @ 7,300rpm and the torque peaks at just over 5,000, like all VTEC engines the model has to be driven hard to experience maximum affect. The VTEC system is clearly evident from 6,000rpm up to redline limiter at 8,500rpm, the car can only be described as making a roar / wail.
A real noise for a car lover. Like all Honda performance cars, to maintain maximum performance the car needs to be permanently driven in the VTEC range. Ideal for shifting from 4th to 3rd and 2nd when needed. A real Japanese high performance and high reliability sports car.
Tweet

The 2 seater is powered by 1 litre 3 cylinder VTEC and an electric motor.

It offers around 70 mpg, even Ben has achieved 60mpg with his style of driving. It's construction is all aluminium, making it light and the design has cues such as covered wheels sloping roof and sloping sides.

It was manufactured in Suzuka Japan, the same factory as the NSX.

We have this car on review all week, we're even doing a long haul to see how an 18 year old hybrid copes in todays world.

The first Civic EK9 Type R model made its debut in Japan.
It was powered by a 1.6 litre B16B DOHC VTEC engine, this power unit produced 185 BHP at 8200 rpm it is exclusively developed. The lightweight engine utilised new techonologies a new valve system, allowing higher speeds, as well as reduced friction and improved breathing, also the added extra of increased
compression ratio's.
This Car triggered the craze of the modern day Civic Type R, a cool looking Honda with real Japanese styling. 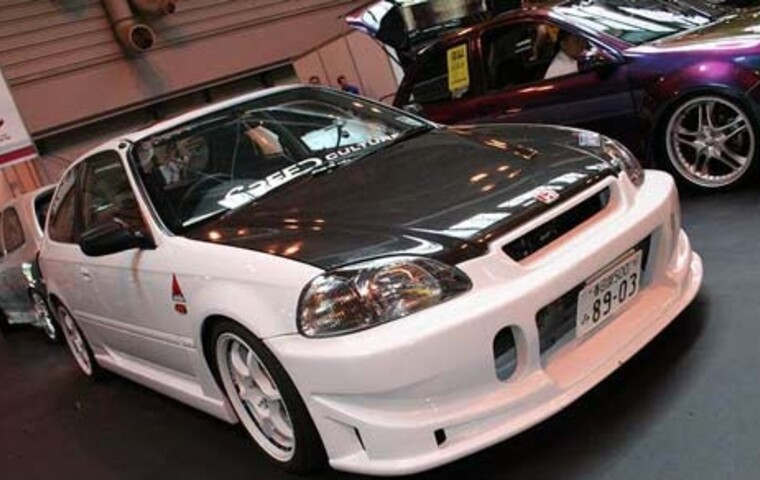 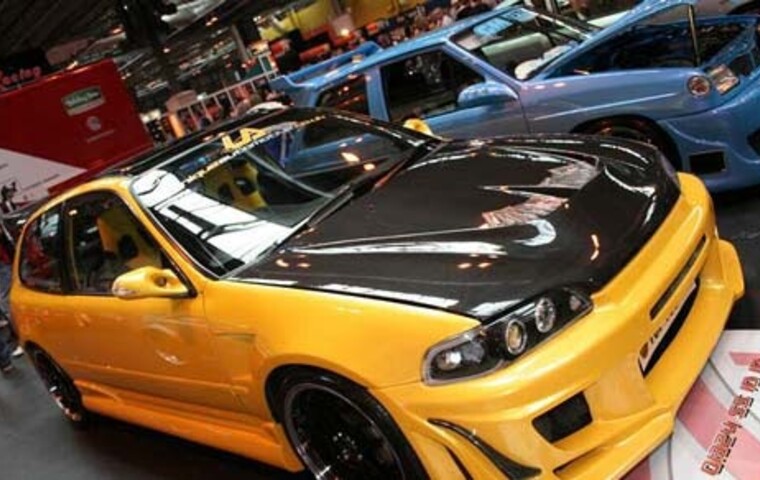 The car was never released in the UK, but was officially released in Japan in 1997.
The chassis of the hatchback shared a lot with the Integra including omission of sound deadening and other weight-reduction measures, the B16B engine was hand ported and fitted with a front limited-slip diff, close-ratio gearbox. The EK 9 had phenominal handling with increased body rigidity, reduced weight, hard tuned suspension, LSD with torque-sensitive helical, Sport ABS braking, and Potenza RE010 tyres. 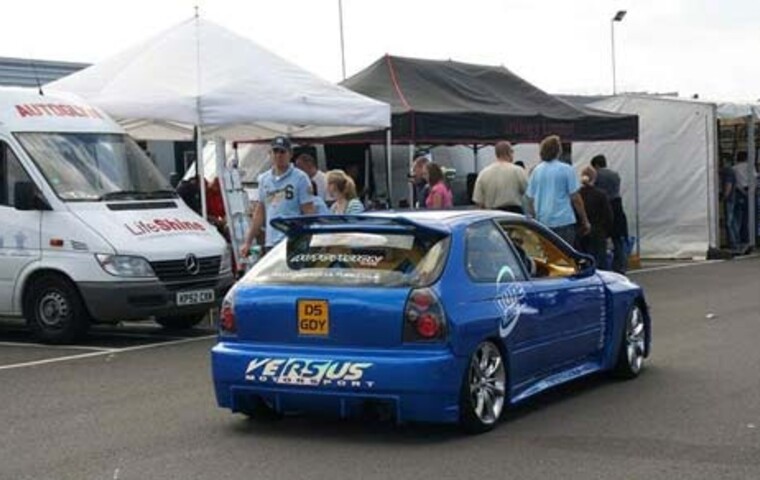 The Civic was styled well also, with 5 stud alloy wheels, red Recaro seats, a Momo SRS 368mm steering wheel, and titanium gear knob and carbon styled panel.
Engine : 1.6-litre (1595cc) DOHC VTEC IL4 - B16B
Max Power: 185ps (183bhp) @ 8200rpm
Max Torque: 160Nm @ 7500rpm
Max Speed: limited 190km
0-60 - 5.7 seconds 0-100 - 17.5 seconds
Type: FWD Limited slip differential, 5-speed manual box
Brakes Front: Vented disc Rear: Solid discs ABS
Wheels: 15-inch 5-lug alloys
Tyres: Bridgestone Potenza RE010 (195/55 R15)
Dimensions & Weight Length / Width / Height: 4180mm / 1695mm / 1360mm
Wheelbase: 2620mm
Weight: 1090kg Minimum
Ground Clearance: 135 mm
Seventh And Current Generation
A global player with the 2, 3, 4 and 5 door models and Type-R versions available.
The new Civic has fresh and innovative styling and a distinctive short nose. It is 50 mm higher than its predecessor. The steeply raked bonnet is particularly aerodynamically efficient, while the arching roof line delineates a large glass area ensuring excellent visibility.
Discreet Type-R logos, an attractive honeycomb grille, front and roof spoilers, side aprons and broad side rubbing strips differentiate the auto externally from other 3 door models. With its 200 horsepower 2 litre engine, the Type-R is the most potent product in the history of the Civic. It epitomises Honda's outstanding motor sport involvement which has netted six Formula 1 constructors’ titles and over 500 motor cycling victories in Grand Prix. This wolf in sheep's clothing behaves docilely in town traffic just like a ‘normal’ compact. However, on the open road, it transforms itself into a racing machine ‘par excellence’: application of the accelerator pedal can catapult the ,motor to 62 mph in just 6.8 secs (Official time).
10 Facts About Today’s Civic
The Car accounts for one in two Honda's sold in the UK
British built Civics are now exported to both Japan (Civic Type-R) and North America (Civic Si)
Sales of the auto in UK for 2002 year to date exceed last year’s figure by 6% driving total volume beyond 20,000, some 7 per cent of its sector
The 3dr model is second only to the Ford Focus in the petrol C-sector 3dr class
The 5dr version lies fifth in the petrol 5dr class, the leading Japanese brand
The hot shot Type-R accounts for one in three 3 door Civics sold
The Civic 5dr was winner of the "Small Hatch" category in the 2001 What Car? Car of the Year Awards – and has twice been voted Britain’s Most Comfortable Car in the publication’s annual Comfort Tests
Notable features of today’s Civic are its exceptional roominess, its fascia-mounted gear lever and the remarkable performance / economy combination of its petrol engines
In May this year, a new diesel-engine model was introduced into the range for European models.
The new Civic not only achieves 4 star Euro NCAP crash safety performance, but combines this with a best-in-class 3 star pedestrian protection rating.

Tokyo, October 18, 2001 - The Honda Civic EK9 replacement announced : A full model change for the popular Civic TYPE R, known for its high performance and sporty, dynamic design. The new model will go on sale 6/12/01 at previous Honda Primo dealers throughout Japan.
The car's design concept was, "Civic TYPE R-the hatchback bullet." It's an exciting 3-door hatchback that boasts a powerful design with superior basic driving, cornering, and braking performance characteristics. The key aims for the car's development were to create a new, bullet-like form; deliver exciting performance; and make the car both safe and environmentally friendly.
The new TYPE R comes equipped with 2.0-liter DOHC i-VTEC engine. Aspirating efficiency has been significantly improved, resulting in maximum power output of 158kW (215PS). The close-ratio, 6-speed manual transmission provides dynamic performance of a professional racer level, while at the same time delivering a comfortable driving feel on everyday roads.
The car also comes fully loaded with performance accessories, including aeroform bumpers, Recaro front bucket seats, a MOMO genuine-leather 3-spoke steering wheel, and a dash-mounted aluminum shift knob for the 6-speed manual transmission. As the ultimate performance model in the Civic series, this car lets its owner directly experience the joy of driving. At the same time, it is also very environmentally friendly, having earned recognition by the Japanese Ministry of Land, Infrastructure and Transport as an ultra-low emissions vehicle. 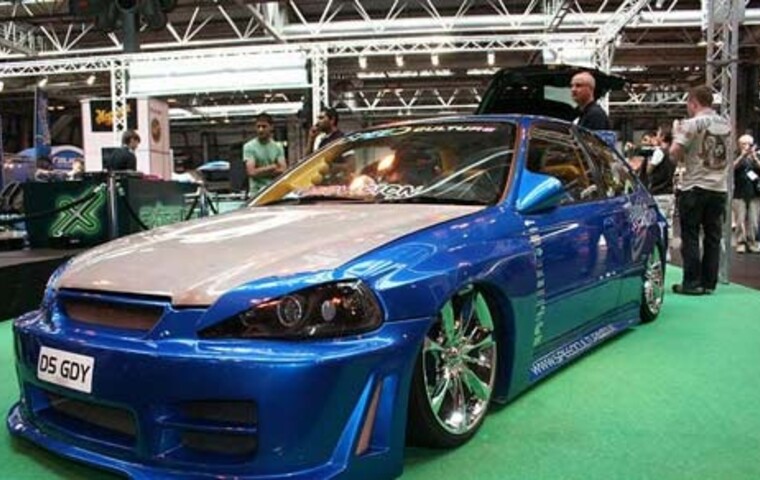