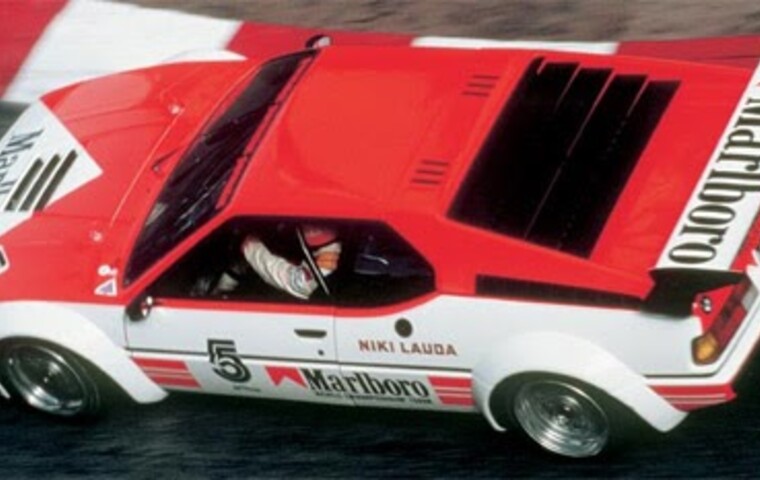 In 1976, the BMW Motorsport Division was surrounded by much speculation, regarding the development of a GT race car for approval in Group 4 and Group 5 racing. In order to qualify, they had to design and engineer at least 400 exact replica cars in 2 years. The project came in the form of the "Mid-Engined BMW M1" (E26) The project took 4 years, and was finally finished in 1980. The Supercar debuted at the Paris Motor Show.
The M1 was designed by Giugiaro and was to be assembled by super car manufacturer Lamborghini, unfortunately, the Italian company were in the middle of a financial nightmare at this time, and this forced assembly to be moved to Baur - the specialist German convertible builders.
When production of the BMW M1 resumed, international Group 5 approval rules had altered, and due to unforseen circumstances, the car did not met the required sales figures. The Beemer Supercar was reincarnated as The Procar series. The original M1 never stood a chance, as by the time it had achieved the prerequisite sales, the car didn't posess the required credentials, and was seen as no longer eligible for the Group 5 racing series.
In 1981, the Procar was driven and co-piloted by David Cowart and Kenper Miller who achieved victory in the IMSA GTO category. This gave the revamped M1 a great feature as a support series car for Formula 1 races within Europe, until its untimely demise in 1981. Again, it never had a chance to prove its worth, due to the unforseen delays and set of circumstance hindering its production. Very few M1 cars were produced, and the rarest model was engineered and assembled between 1979 to 1980 by Baur. This particular model utilised an Italian space frame chassis designed on the basis of the Turbo concept of 1972.
The BMW M1 ran a 3.5 litre straight 6, 24-valve, an engine that already powered a range of other models. This engine had 277 bhp at 6500 rpm, and 239 ft/lb of torque at 5000 rpm. For the racing versions, a few were developed with power outputs exceeding 850 bhp.
This auto was a true Italian sports car in its look and feel, with the exception of a 3.5 German made straight six engine howling from its rear. The car was described as the sensation of having bass subs behind your head, minus the subs and the twin-cam six just inches from your head! All in all, a real race car.
Today there are only a small amount of road going M1 cars in existance.
Tweet