Long time followers of the site might remember articles and videos posted about the restoration of my 1973 beetle and Triumph TR4. Needless to say it has been a labor of love, 4 years later where do we stand?
Tweet

The TR4 Story Update
Despite the previous update only being two weeks ago the team have made substantial progress with the TR4 restoration project.
The team and I are now extremely happy with the amount of progress we have made, we are able to see how much potential the car has. The TR4 been looking so sad of late and was in need of some TLC. The car is taking a lot of work and time, all worth it, and it is certainly starting to pay of,  we are at the best part of any car restoration - when the donor starts to look like a car again.
In the last few weeks the bumpers and hood arrived from US, which has allowed us to progress, this meant that all of the electrical components could be connected and other parts could go back onto the car. The new chrome bumpers have been fitted, as well as the grill and lights have also been fitted, and the brakes and suspension. The exterior is all most finished, the only major yet to be fitted yet are the brand new chrome wheels.
The interior parts which arrived in the last few days were the carpets, which will be fitted very soon. The carpets as you expected need to be put in before the seats and centre console, this has slowed progress. All interior components have now arrived and are waiting to be housed.
The car when complete is going to sport a full black interior with a custom designed wooden dash board, this will complete the perfect show room finish.
Many hours of time and money have been invested on the TR4, but it's all worth it.
The car has not been restored to be sold on, but to driven again and showcased and the occasional Sunday driveThis car was resorted to be driven again
We hope to have many more like it in the future, thank you for following the TR4 restoration story, and look out for the car on the roads in and around the Newark and Sherwood area.
Tweet

This is one of the first cars which arrived in the new garage and has been seen in the background of other articles which have been posted on Planet Auto. 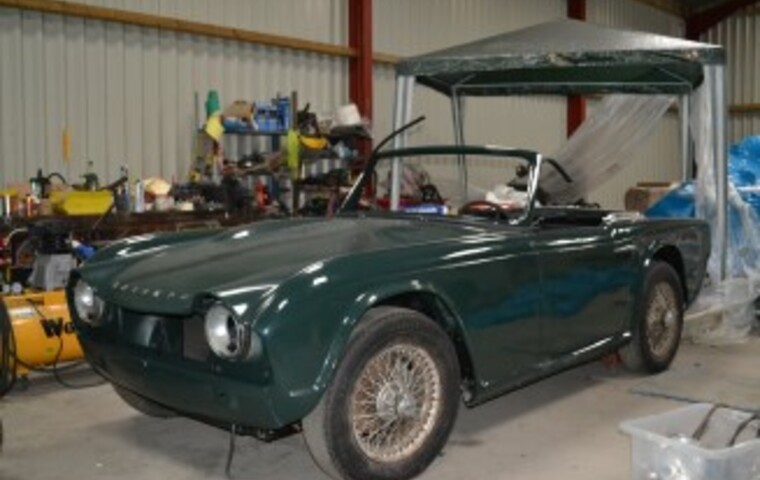 This Triumph TR4 came from Denver, Colorado where it lived since new. In 2010 it was imported to England from America. When the car was imported, there was not only one TR4, but another in the container.

Now an opportunity like this this doesn't come around very often, and we bought both cars a Green TR4 and TR4A.

We started restoring the TR4. Once we got the vehicle running we started on the large amount of work to be done. A small amount of welding was done on the skirts of the car, the body was taken off the chassis and was sand blasted and repainted. The engine was also rebuilt and the chassis was repainted.

The car is now coming together again.

Lots of new parts arrived daily including; 5 new Chrome wire wheels, carpet set and Chrome bumpers. The dash board in this car is custom made by out team. It's now time for the final bits including having the TR4s electrics being refitted.

Hopefully by the end of the year the car should be complete and ready to drive. This will be a car that we will take to shows, this is why we have done so much work on this car. the restoration to date has taken three years and is onward going.

There is also the TR4A which we hope to do in the future. First we are going to complete the VW Beetle and some other vehicles in the lockup.

Watch out for updates on the TR4 project in the future.